This online shop is using cookies to give you the best shopping experience. Thereby for example the session information or language setting are stored on your computer. Without cookies the range of the online shop's functionality is limited. If you do not agree, please click here.

This means that the VAT rate of the country to which the article is delivered will apply.
After you have logged in, the prices will be displayed including the valid tax rate for the country you have selected 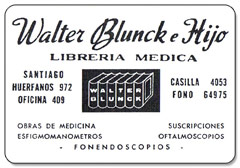 In 1932, Walter Blunck, from Husum on the North Sea coast, went on a journey to South America, and staying rather longer than planned in Chile, became acquainted with a Chilean doctor, who not only wanted to learn German, but also required a book from Germany. Shortly thereafter a friend of the doctor, who also required a book, got in contact... and so it began.

In 1934 the Bookseller Walter Blunck was officially registered in Santiago.

During the Second World War Germans abroad were forbidden, by means of a 'black list', from business activities, so instead the family developed a chicken farm on an 8 hectare parcel of land. To this end an indestructible American car was converted into a truck to transport eggs, grapes and such products to Santiago where a lively black market was blossoming. Thus the war years passed.

In 1946 books could be imported again, but since no medical advances were to be expected in the foreseeable future from Germany, and German publishers were far too expensive, only American books were in demand.

In 1954, at the age of 17, Hans-Dieter Blunck entered his father's business, and developed a speciality within the medical book business for technical literature.

Between 1959 and 1961 he gained experience with various publishers and book stores in Europe, getting to know the land and people, including the Hamburg book dealer, Dagmar Funke, who returned with him to Chile.

By the year 1971 the business had grown to become the largest book seller in South America (shipping to customers in Chile, Argentina, Uruguay, Peru and Bolivia), and described by the American publishers as “the most spectacular bookstore in the world“ and “the icing on the cake“.

After 1971 political restrictions made it impossible to import books and the family relocated to Germany. My parents started all over again: 1974 was the founding of Dagmar Blunck Scientific Books. Lacking space for an office or workspace, books were stored under our beds, the kitchen table served for packaging and posting. The first years were not easy. But thanks to their dedicated personal involvement and particularly their enjoyment of working together, they succeeded in creating this unique bookshop, which so many of you have come rely on for professional personal advise and suggestions.

While still in Primary School I was drafted to help in the office, addressing and stuffing envelopes, fixing stamps and by 2000 had joined the company as certified Bookseller.

Nine years later the business was entrusted to me with my parents' continued advise and support. My father was actively involved well into his 80th year and my mother remained to be an integral part of the business until her death in 2020. Her help was indispensible for me.

I am deeply grateful for their support and everything they taught me.

My many years experience as Medical Books Specialist enable me to respond to your requirements, anticipate your needs and inform you personally. This gives me genuine pleasure.

Our success is based on one hand on the fact that we strive to fulfil each book requirement for you, our customer. Good service and individual advice are paramount. On the other hand it is the long-lasting loyalty of so many of you. For this allow me to thank you on this occasion. Our efforts remain to earn and maintain your trust.